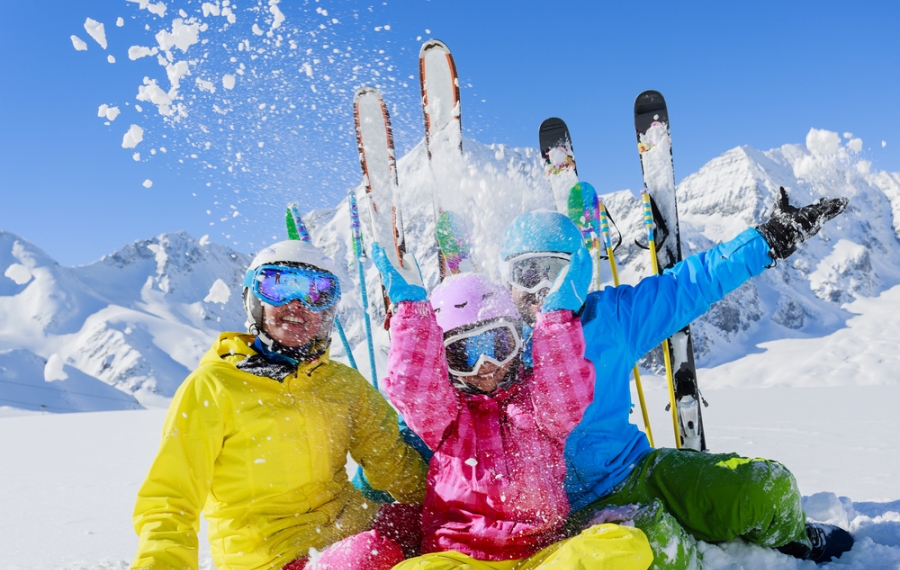 No.1 Currency compared the cost of a basket of ski essentials in some of the world’s best-known ski resorts. The basket included; six days of ski and boot hire, a six-day lift pass, ski lessons for six days, as well as the cost of a coffee, a bottle of beer, a bottle of wine and a quick lunch for two on the slopes.

The research revealed that although Bansko, in Bulgaria, will make the smallest dent in your pocket, with a week’s skiing there costing less than £300 (£295.26), there is plenty of great value to be found in the more popular resorts located in France, Austria, Switzerland and Italy.

La Thuile, in Italy (£447.47), Les Deux Alpes, in France (£460.70), and Kitzbuhel in Austria (£481.19), come out as by far the best value resorts this season. All three resorts each work out at more than £500 less than the most expensive destination, Aspen in the USA (£1,006.88), for a week’s skiing, excluding accommodation and flights. You can also expect to pay significantly more for flights to the USA than the short hop over to Europe. For example, Les Deux Alpes is just a two-hour flight from the UK, so it’s convenient as well being great value.

If you have your sights set on piste in one of the more fashionable resorts, for just over £600 you could be skiing in the tracks of the rich and famous in Courchevel, France (£639.26). When Posh isn’t launching a new fashion line and Becks isn’t busy promoting brand Beckham, the world-famous pair favour a trip to the elite Alpine resort. Other Courchevel regulars include Pippa Middleton and the legendary adventurer Sir Ranulph Fiennes.

Verbier in Switzerland is at the tip of the peak when it comes to the cost of a week’s skiing; and at £817.65 excluding accommodation and flights, it is almost £400 more expensive than the best value European resort of La Thuile. However, Verbier is still almost £200 cheaper than Aspen. Saying that, if money is no object and you want to ski like Mariah Carey or Jack Nicholson, then Aspen, Colorado is the resort to head to.

The luxury US resort has the most expensive lift passes, at more than double the price of a lift pass for Kitzbuhel (Austria) or Grindelwald (Switzerland), and it also tops the charts for the priciest ski and boot hire. A six-day break on the gold-plated slopes will set you back £1,006.88 before flights and accommodation. No wonder the St Regis, Aspen’s most luxurious slope-side hotel, has hosted many of America’s A-list celebs, including Kanye West, Paris Hilton and the Kardashian family.

The table below shows the cost of a shopping basket of ski essentials across the some of the most popular ski resorts with Brits this winter: 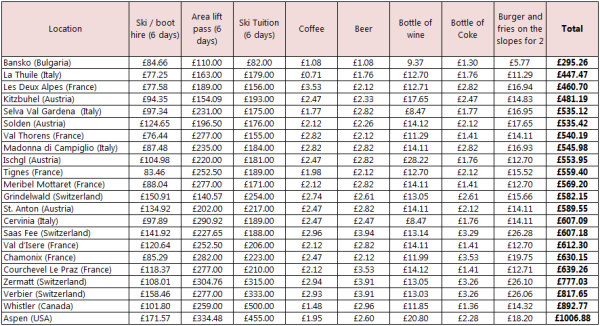 Simon Phillips, Retail Director at No.1 Currency, comments: “There’s always going to be a list of extra costs involved in a skiing trip – boots, skis, lift-passes – so it’s unlikely to be the cheapest type of holiday. But the strong Pound is helping to ease the pain a little this season.

“While everyone will have their own list of criteria when choosing a ski destination, one factor not to overlook when planning a holiday is currency exchange rates – as they can make a significant difference to the bottom line. The Pound’s strength against the Euro means that those opting to ski in the Eurozone will currently get over €700 for £500 – meaning their holiday money goes that bit further.

“By contrast the strong Dollar means if you want to ski stateside this winter you’ll have to dig deep into your pocket. If you do opt to hit the slopes on the other side of the Pond, you’ll need to shop around, or risk snowploughing into a seriously expensive break.”

Contact No1 Currency
X
Submit
In order to give you the best experience our website uses cookies to personalise content and ads, to provide social media features and to analyse our traffic. You can control and/or delete cookies as you wish from your browser. If you block our use of cookies, you may be unable to access certain areas of our site and certain functions and pages will not work in the usual way. By continuing to browse the site you are agreeing to our use of cookies. For more detailed information on the cookies we use, please review our Cookie Policy